Toutaku Army
Toutaku Faction  (, Toutaku Faction? lit. Dong Zhuo Army) is one of the factions in the Koihime†Musou series. It is an army centered around their leader, Toutaku Chuuei, who eventually becomes the Kan's Chancellor of State.

This faction, upon the introduction of new characters in Kakumei, is absorbed into the Kan, although the group is still largely independent of them, with their own agenda.

To protect Yue from danger, and maintain their power as an army.

The kanji for the family name of its leader Toutaku Chuuei, 董, inscribed upon a blue bird.

After Emperor Ling's death, a time of upheaval happened with his successor unclear.

Eventually, the one who comes out on top is the Toutaku Army. And since, Toutaku, named the Chancellor of State, manages the capital, Rakuyou. The White Clothed Army that serves as the Visual Novel's antagonists, however, spread malicious rumors of Toutaku's supposed tyranny and dictatorship, and would become the catalyst for the Anti-Toutaku Alliance that opposes the faction.

Kayuu would, unfortunately, due to her pride, ignore strategy in favor of showing off her strength. She would then be killed by Kan'u, resulting in the Alliance taking Shisui Pass.

At Korou Gate, Ryofu and Chouryou proved a more difficult adversary for the Alliance. However, Ryofu would then be defeated and captured by the Hongou Faction, and Chouryou would be captured by Kakouton. And with their loss, Kouro Gate is taken, and the Alliance makes their way for Rakuyou.

Toutaku and Kaku would then be encountered by the Hongou Faction, and hidden under them as Maids, effectively resulting in the dissolution of the Toutaku Army.

Things largely move the same was as in Koihime Musou, however, rather than tyranny, the charges against Toutaku is more incompetence as leader.

However, Ryofu and Chinkyuu would still persist, and attack the Ryuubi Army later, although she would then succumb to hunger and weakness, before being recruited into their ranks as well.

The Toutaku Faction plays a largely background role in the story of the Gi Route, only serving as the nominal antagonist of the Anti-Toutaku Alliance. After their defeat in Shisui Pass, and Korou Gate, the Toutaku Army would then retreat into Rakuyou and stage a siege.

Kazuto, who joins Sousou in this route, would suggest a strategy to wear down the strength of the defenses of Rakuyou, eventually resulting in the Toutaku Army's complete defeat. When the alliance enters, Kazuto would notice Toutaku and Kaku escaping. Kazuto would then usher the two into the Ryuubi Faction, all the while being unaware of the two's identities.

The Toutaku Faction serves only as background to the story of the Go Route, as the Sonsaku Army only viewed the Alliance as a chance to network with other warlords as well as show off their own strength.

One notable incident is when they used the name of Sonken Bundai to drag Kayuu out of Shisui Pass, as Kayuu had a previous grudge against the previous leader of the army.

Things largely go the same as other routes. Shisui Pass is taken. Kouro Gate is taken. And finally, Rakuyou is taken.

One notable incident is that, after Sonsaku's death, is when Ryofu, tired and hungry, came and took one of their territories, resulting in a grudge between the Go Army and Ryofu. Ryofu's subsequent joining of the Ryuubi Army, an army that was formerly allies with the Sonsaku Army, did not help and completely soured the two armies' relationship.

Toutaku is approached by Ryuukyou to help her take over the throne from Reitei, as Reitei is proving as being too incompetent as a ruler. Toutaku would agree and the Toutaku Faction with her would then take control, ousting Reitei from her position, and putting Ryuukyou, taking up the Imperial Name Kentei, as the Emperor.

This would be opposed by the Enshou Army as Enshou had previously made rapport with Reitei, and they, alongside Kashin and Kataigou, would try to stage their own rebellion against the new Emperor. The Toutaku Faction would swiftly knock this rebellion down, forcing Enshou to return to lick her wounds.

However, Kentei's rule would turn out not to be particularly popular. Their policies too extreme for the nobility, and so they called Toutaku, as the face of the current administration as Chancellor of State, a tyrant. This triggers the formation of the Anti-Toutaku Alliance. Roshoku Shikan, who is aware of the true character of Kentei and Toutaku, would appeal to the Ryuubi Faction to help them, and Ryuubi agrees. Ryuubi joins the Alliance, hoping to secure the safety of Toutaku and Kentei.

Things largely play out as in Shin Koihime Musou. Kayuu is defeated, but isn't killed, at Shisui Pass. Ryofu and Chinkyuu escape from their defeat at Kouro Gate, while Chouryou Bun'en is captured and recruited into the Sousou Faction.

The Ryuubi Faction would save the Toutaku and Kaku and disguised them as servants and bring them back to their territory, effectively dissolving the Toutaku Army. 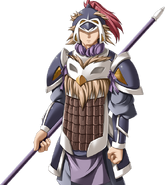