A full English and Chinese version entitled Suzukuri Dungeon: Karin in the Mountain was released for PC on June 18, 2021, by localizer-publisher Shiravune. It is available for purchase on Johren.

An updated expansion, called Hoshiyomi no Shintaku, was released on July 30, 2021.

After a thousand-year nap sealed deep inside a mountain, the diabolical demon queen Karin herself is about to be unleashed once more!

Meanwhile, the young adventurer Kazuto is in serious trouble. When his whole party quits on him at once, his future prospects in the trade look bleak. But just when all hope appears lost, he receives a helping hand from... the demon realm?! This mysterious lady refers to herself as Fuu—she leads him to a dungeon hidden beneath Mt. Giou, where he finds himself face to face with Karin, the demon queen of legend. Kazuto loses a bet to her, and before he knows it, he's entrusted with the lofty task of managing the entire dungeon, with absolutely no strings attached! Not the merest fiber of the meagerest thread.

Expand your budding labyrinth, and strengthen your squads of fearsome (and cute) demons! Build amenities to shake intruders down for cash, then send them packing with well-placed traps and bosses!

Cozy up to your sexy and stalwart companions, and maybe a few dungeon-delving adventurers...! If you plan well and fight hard, you might learn Karin's secrets. Make a majestic lair that's worthy of your dear devilish despot, or find love, peace, and happiness with someone else along the way.

The game focuses on dungeon design and defense. Place traps, combat arenas, bosses, and entertainment facilities in the dungeon to lure intruders deep, give them a fun time, and get them to spend gold—but bounce them out on their butts before they touch your hoard, which is tied to your dungeon's overall finances.

You can upgrade your allies and improve their skills, as well as expanding and upgrading the dungeon itself via a mysterious device called the Compass. What you choose to place and where is critical to success. Additionally, you can form squads by pairing leaders and units. You can use this to create combinations with powerful synergy, or to counter specific enemy abilities.

Each turn, you can either Dispatch or Rest. Dispatching sends your allies out to promote the dungeon, which will bring in prospective plunderers for you to defend against and let you read a charming story scene. Resting skips a turn and gives you more opportunities to talk to your allies. You can rearrange and upgrade your dungeon and your units as free actions, or you can talk to any of the girls you've recruited. Advancing any of their conversation sequences all the way to the end will unlock an ending, although you'll often need to fulfill other conditions along the way in order to proceed.

You'll gain extra Turns as your Dungeon Level increases, but eventually you'll run out, or get plundered too hard, and reach a Game Over. This is basically inevitable, so just smile and start a New Game +. You can inherit all of your units' abilities, and eventually, you'll be powerful enough to complete your mission and fully revive Karin. 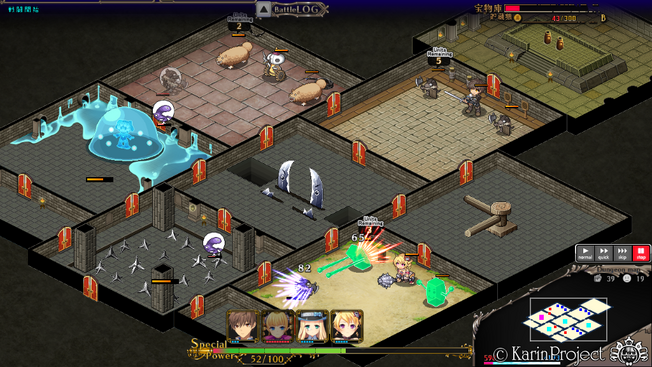 Released on July 30, 2021, this is an updated version of the original game, featuring new characters such as Touka, Aisha, and Shanfu.