Yukie Maeda (Credited in the VN as Nojima Kana)

Sousou Moutoku  ( , Sousou Moutoku? Cao Cao - Mengde), also known as Karin  (, Karin?), is the founder and ruler of Gi. She is one of the main female protagonists and main heroines of the Koihime†Musou series.

She is the ruler of the Gi kingdom. In the first VN she makes her appearance in the anti-Toutaku alliance. Her first meeting with Kazuto is brief and hostile, with her calling him "an ugly guy". However, she shows a deep interest in Kan'u and wishes to have her. During the war against Hongou faction, she becomes brainwashed by Ukitsu. Kakouton and Kakouen notice that there's something wrong and cease fighting. Together they go and asks Kazuto for help. After being rescued, she surrenders and spends her time in intellectual pursuits as a captive of the Hongou faction. When Kazuto declared that he will not execute them, she strongly objects, bewildered by how Kazuto has survived up to this point and became so powerful despite his naiveté, unlordly behavior, and seemingly blind trust in others. However, at the same time she realizes that his kindness is his strongest attribute and willingly gives up her position as the ruler of Gi to Kazuto, knowing that the country would be in good hands. Eventually she starts to like him for his gentleness, this is especially true as she realizes he does have keen insight and intelligence within his clumsy manner. As such, she includes him in her selective teasing of her subordinates. She sends out troops to assist Kazuto in his final battle against Ukitsu and Saji.

In the Gi route, she is introduced searching for a book which is in the possession of three bandits. She sees a shooting star right before heading out; her search leads her to the wilderness, where she encounters Kazuto. She takes him back for questioning, during which Kazuto mentions the Gi faction and calls her full name despite only been told the name "Sousou". China at the moment hasn't split into factions yet and Gi only exists as an idea in Sousou's head; in fact, she only recently thought of the name "Gi" and hasn't told anyone about it. This incident helps to convince her that Kazuto is indeed from the future of another world and she takes him under her service, intending to make use of his knowledge in her conquests.

The queen of the Gi and a General of the Kan empire. Sousou likes beautiful women and has a hobby of teasing her subordinates, especially her strategist Jun'iku, but is also greatly interested in Kan'u.

In fact, in the first season's closing credits shows her "kidnapping" Kan'u; the next scene shows Sousou's private chamber, with a large number of hearts flying out of Sousou's bed, which is closed off by curtains. Kan'u was later returned to the dining table with the rest of her friends, albeit covered in lip marks and quite shaken.

In Shin Koihime†Musou, she is also revealed to be an excellent chef.

Sousou's personality differs somewhat between the first and the second VN.
In both versions, she is extremely prideful, intelligent, patient, and calculating, with a tendency to boast the power of Gi abundantly. As a ruler she is very capable and ambitious; on the battlefield she is a military genius who isn't afraid to reach her goals using whatever means necessary. She loves to have people of talents under her control and has high (but reasonable) expectations of them; she is unwavering and rules with an iron-fist. Her words are absolute, and if her expectations are not met, it's normally impossible to escape her wraith, though it rarely happens due to her taking command so efficiently. Despite being seen as tyrannical and egoistic, she is far from heartless and is in fact one of the most noble characters in the series; she adheres to her principles with no exceptions. Beneath her harsh rule, she is in reality fighting to unify China for the sake of peace; with a survival-of-the-fittest mentality, she won't hesitate to crush any opposition. Because she relies so much on force, people outside her faction tend to see her as evil.

In the first VN, she starts out extremely arrogant, with a distinctive hatred towards the male gender. She looks at her subordinates as tools to be used at her disposal, a view which puts her at a very sharp contrast with Kazuto's ideal of comradery. However as a ruler she still cares deeply for the well-being of her people, as before passing on her leadership to Kazuto she made him swear not to make them suffer.

Due to being given her own route, the second VN makes her a deeper, more complex character. Perhaps the biggest change is the absence of her misandry—in the Gi route she takes a liking to Kazuto shortly after meeting him. She recognizes Kazuto's potential and will often put him in challenging situations to hone his ability (however, rather than guide him step-by-step, she lets Kazuto work out everything on his own, only correcting him if there's a mistake). Although still a proud and dignified person with great ambition, she is made less arrogant; she is willing to cast aside her pride and lower her head should the situation arise, such as when she apologized to Kyocho for making her village suffer despite not being directly responsible. While she is still firm and strict most of the times, she does show great kindness and is as caring to her subjects as they are to her, as shown when she became quite shaken after hearing that Kakouton had been wounded in battle. Furthermore she posses an innate charisma and leadership which naturally draws people to serve her to the best of their ability. Her intellect is also made more apparent, as shown when she actually manages to have a grasp of Kazuto's situation rather quickly and in addition seems to understand the concept of alternate universes and histories. She is also an extreme realist who knows that ideals alone couldn't bring peace to a warring world, this puts her in direct contrast with people like Ryuubi. Due to her adhering so adamantly to her beliefs, on occasions she can get emotional and lose her cool when her principles become challenged.

The anime portrays her similarly, except her harshness is made even milder due to the absence of warfare. Her honorable side is highlighted with her keeping Batou's horse accident a secret at the cost of her own reputation.

In the manga adaptation of Shin Koihime†Musou, however, she has a very prominent superiority complex. She is much more cruel and sadistic, with a habit of mentally tormenting those who go against her principles and getting joy out of their reactions (although she sometimes does it to test a person's character). She is also much more selfish and impatient, being so absorbed in her dream of conquest that, should things not go her way, she is quick to throw very violent temper tantrums where she won't hesitate to decapitate her own subjects if they were to bother her at the wrong time. It is also interesting to note that her dere side (if it exists at all in the manga) is never shown.

She is a himedere in both versions of the VN.
In the first VN she starts out as a lesbian; in fact one of the goals for her conquests is to bring all the beautiful women into her harem. In the second VN her sexuality is less defined. While she has a strong preference towards other women, unlike in the first VN she does not have any resentment towards men. In her same-sex relationships, she can be best described as dominating and, when with Jun'iku, sadistic. With Jun'iku she employs a wide variety of toys and forms of female submission, mainly through bondage and foot-licking. With the Kakou sisters she switches to normal lesbian sex. It is assumed that Kazuto is the first man she's ever been with. Due to losing her status and becoming Kazuto's subject, she gets more submissive and is subjected to Kazuto's teasings just like the other girls. She is the only girl mentioned to be able to squirt.
In the second VN due to her having an entire route of her own, her relationship with Kazuto is greatly expanded. In the beginning her opinions of him are not very high, since he is in no position to be of any use to her. As Kazuto becomes more competent, Sousou starts to show more affection towards him, occassionally flirting with him and even becoming self-concious when Kazuto hints his preference for large breasts. However, before meeting Kazuto her romantic relationships has always been people falling for her, therefore falling in love herself is a new experience. This results in her having difficulty expressing herself clearly to Kazuto and more often than not she gets angry and blames him for not being able to understand her feelings.

Due to the lack of a male lead, in the anime she remains a lesbian.

Scythe Proficiency: Sousou is very adept at fighting with her scythe. She possesses great control of the weapon. In the Gi route of the second VN, as a test of character, she takes a full swing at Jun'iku and manages to cut off a single strand of her hair.

Hand-to-Hand Combatant: It's implied that she has knowledge of hand-to-hand combat; in one instance she punishes Kazuto via a shoulder throw.

Enhanced Physical Prowess: While she seldom take part in actual fighting, her physical abilities greatly surpass those of normal soldiers. During the war against Shoku in the second VN, she is strong enough to impress Kan'u, although she admits that she can only keep up for a few rounds in a direct confrontation. She also manages to block a strike from Ryofu, but admits that she won't be able to withstand a second attack.

Other Skills: Of the entire character cast, she is perhaps the most talented. Other than being endowed with both civil and martial virtues, she is also gifted in many other fields of study, including but not limited to:

In 2010 MileStone Inc.(now shut down) released Twinkle Queen (トウィンクル クイーン), which is a fighting game for the Wii crossing over girls of 4 different eroges: Shukufuku no Campanella; Tayutama: Kiss on my Deity; Shin Koihime†Musou; and G Senjou no Maou. Three girls fromeach eroge are featured for a total of twelve fighters. Ryuubi, Sousou, and Sonsaku are chosen to represent K†M. 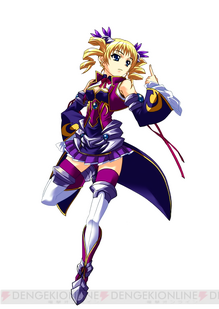 ai sp@ce, the now-closed-down Japanese virtual 3D massively multiplayer online social game (MMOSG), collaborated with Shin Koihime†Musou for its watergun event on May 25, 2010. Ryuubi, Sousou, and Sonken are are chosen to represent K†M and are available as avatar skins for the Shin Koihime†Musou stage missions. 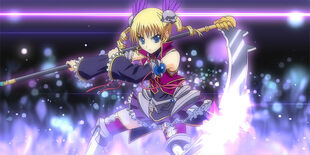