Harumi Sakurai (VN, Anime) (Credited in the VN as Kazane)

For others named Sonken, see Sonken Bundai and Sonken Kouyuu.

The ruler of the Kingdom of Son Go, she is first introduced during the the anti-Toutaku campaign as part of the alliance.

After her defeat, she gives herself up as a punishment for her incompetence in being a ruler. However, she begins to develop feelings for Kazuto as he accepts her as simply a girl rather than a ruler, and for always treating her and her subordinates more as friends than prisoners during their time as captives. It is also slightly hinted by Ukitsu and even Sonken herself that she developed a crush for Kazuto much earlier, possibly during their alliance against Gi.

Since Sonsaku remains alive, her older sister, Sonsaku, remains the leader of the Son Faction. Her hair is also significantly longere.

She is the primary love interest of this route. She usually works on the sidelines, watching Sonsaku in her conquest for the sake of Son Go. However, when Sonsaku is assassinated in the war against Sousou, she takes up the mantle of leader, cuts her hair, and draws the symbol of the leader upon her forehead.
She was reluctant to fall in love with Kazuto, as she was instructed to by her sister. But properly falls in love with him later.

Second sister of the Son family, unlike Sonsaku, she is less ruthless, uneasy about herself, and more kind-hearted. She worries about how her sister's wars are affecting everyone while, unknown to her, her sister is doing this for her sake. Sonsaku has chosen her to be next-in-line to the throne; she knows that she will be a better ruler who will heal the wounds the nation has suffered from the wars.

Unlike her elder sister and mother, she does not like to wage wars of conquest and instead prefers peace. For that reason, she has an uneasy relationship with the Go strategist Shuuyu, who sees her as lacking ambition and constantly reminds her to follow Sonsaku's footsteps and carry on Son family's pride by conquering the Empire. Due to Shuuyu frequently criticizing her for not fulfilling expectations as a member of the Son family, she feels overshadowed by her predecessors. She is insecure about her abilities as a ruler and questions herself whether she's fit to inherit the throne.

Initially, due to the pressure put on her as the ruler of Go, she tends to keep away from romance. However, her interactions with Kazuto made her soften up. Due to Kazuto's influence, she eventually becomes willing to participate in group sex.

Swordsmanship: She has received training in wielding a sword from Kannei.

ai sp@ce, the now-closed-down Japanese virtual 3D massively multiplayer online social game (MMOSG), collaborated with Shin Koihime†Musou for its watergun event on May 25, 2010. Ryuubi, Sousou, and Sonken are are chosen to represent K†M and are available as avatar skins for the Shin Koihime†Musou stage missions. 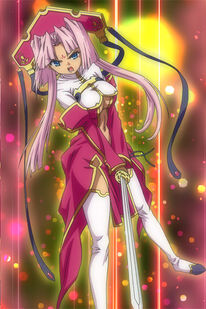