Ryuudo  (, Ryuudo? Liu Du), also known as Rui  (, Rui?), is a minor warlord from the end of the Kan Dynasty. She is introduced as part of Koihime†Eiyuutan but has not formally debuted in the Visual Novel as of yet.

A scaredy cat, who is afraid of most of the other faction leaders, including Ryuubi Gentoku, Sousou Moutoku, Sonken Bundai, Reitei, and Kentei. She has the unfortunate tendency to wet herself when in stressful situations, which is often, considering her timidness.

Although she's timid, weak-kneed, and a crybaby, she's still a viceroy who is giving her all, desiring the growth and safety of her territory's people, despite her shortcomings.

Due to her large breasts and frightened expression, she's often looked at as though she was a sinful girl, but she herself has no intention of appearing like that and is often overwhelmed by the looks. Although she's scared of many of the warlords, she looks to Kazuto as a kind person. 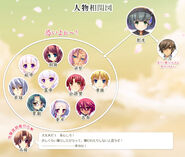