Mai Gotou (Credited in the VN as Agumi Oto)

Ryuubi Gentoku  ( , Ryuubi Gentoku? Liu Bei - Xuande), also known as Touka  (, Touka?), is the ruler and founder of Shoku, and Kan'u and Chouhi's sworn older sister. First introduced in Shin Koihime†Musou, she is one of the main female protagonists and main heroines of the Koihime†Musou series.

During the Shoku Route, she is first introduced meeting Kazuto in an open field, after his arrival.

During the Gi Route, she is first introduced during the anti-Toutaku conference as part of the alliance. She is assigned to attack Shisui Pass with Kousonsan.

After the war, her faction becomes targeted by Enshou and Enjutsu. Not willing to make any sacrifices, she asks Sousou for permission to travel through Gi to escape the invading En Army. Initially, Sousou demands to have Kan'u as "payment", which Ryuubi refuses. Rather than handing over Kan'u, she chooses to find another way out of the situation despite knowing that there is no other way. Sousou harshly criticizes her naivety but, in the end, does permit Ryuubi to pass. However, Sousou also warns Ryuubi that it is inevitable for Gi to invade their faction and advises Ryuubi to take the offensive first.

Although she is reluctant to do so, Ryuubi attacks Gi after reestablishing her faction as Shoku. Her principle of overcoming opponents through reason and compassion enrages Sousou, causing the latter to launch an offensive front despite having fewer soldiers. Her forces are almost successful in defeating Sousou but Kazuto manages to bring Sousou back to her normal self. Realizing she had acted out of anger, Sousou orders her troops to pull back, forcing Ryuubi into a drawn-out siege. Ryuubi is unable to break through the fortress before the arrival of Gi reinforcements and retreats.

Introduced in Shin Koihime†Musou, she belongs to a distinguished family and inherited the family heirloom sword. However, she encounters a man who steals the sword, takes on her identity, and causing her name to fall into disgrace.

To redeem herself, she ventures out in search of the man and her sword, which leads her to Kan'u and company, who are greatly surprised, as they've met the man before and took him to be the real Ryuubi. After being attacked twice by bandits while venturing alone, she concedes to Chou'un's suggestion of traveling together for protection. The news came that Kousonsan somehow got possession of it. It is then revealed that Ryuubi and Kousonsan were classmates in primary school. The group goes to see Kousonsan, only to find out that Kousonsan pawned it to Enshou in exchange for food to feed the people. Feeling guilty, Kousonsan leads the group to see Enshou, who tells the girls that she gave the sword to Enjutsu for an "extremely rare robe that idiots can't see".

She eventually gets her sword back, thanks to Koumei who conned Enjutsu in the same fashion Enjutsu herself tricked Enshou. Sadly, she loses her sword for good when she used it as a lightning rod to destroy a boulder which blocked the lake that's supposed to flush away bandits during a bandit attack. However, after a lecture from Kan'u, she realizes that she sacrificed her sword for the sake of an entire village. So she decides to follow Kan'u's example by making a vow of sisterhood as the second younger sister. But Chouhi objects because she wants to the only younger sister of Kan'u; so instead Ryuubi becomes the eldest sister. To her surprise, she is given a new sword, which according to legend is her old sword that had transformed due to her heroic act.

Arguably the only pacifist leader (Toutaku is only a figure-head) among the factions. Despite her position as the ruler of Shoku, she is simple, indecisive, and quite clumsy. Nevertheless, she can be surprisingly insightful at times and is very benevolent, displaying extreme kindness not only to her friends but to strangers as well. Like Sousou, people are naturally drawn to her. However, her charisma lies in her devotion towards her friends and selfless compassion towards her people. Her childlike pureness can become quite a handful for her subjects.

Under her cheerful and childish ways, she is very determined to save the people suffering from civil unrest. She has, on rare occasions, become upset about issues regarding the well-being of the people. In direct contrast to Sousou, she is very unwilling to solve her problems with violence; she believes in a world of inherent peace and morals and will always try to persuade others through reason.

Ryuubi has shown no problem sharing Kazuto with other girls or group sex.

Swordsmanship: Her abilities with the sword vary depending on the media. In Ryuusei ga Tsumugu Monogatari she is seen cutting down enemy foot soldiers. However, in the Shin Koihime†Musou manga, anime, as well as the VN, her low combat ability is heavily emphasized.

Leadership Skills: Her exceptional benevolence and compassion naturally draws people to her and plays a major role during diplomacy. Due to her background, she associates with the common folk and easily gains their support and trust.

In 2010 MileStone(now closed) released Twinkle Queen (トウィンクル クイーン), which is a fighting game for the Wii crossing over girls of 4 different eroges: Shukufuku no Campanella; Tayutama: Kiss on my Deity; Shin Koihime†Musou; and G Senjou no Maou. Three girls from each eroge are featured for a total of twelve fighters. Ryuubi, Sousou, and Sonsaku are chosen to represent K†M. 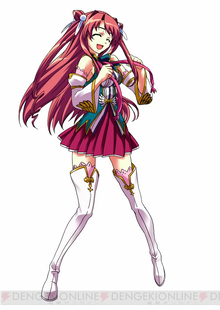 ai sp@ce, the now-closed-down Japanese virtual 3D massively multiplayer online social game (MMOSG), collaborated with Shin Koihime†Musou for its water gun event on May 25, 2010. Ryuubi, Sousou, and Sonken are chosen to represent K†M and are available as avatar skins for the Shin Koihime†Musou stage missions. 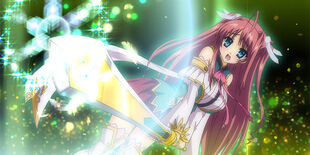