She is the Commander-in-Chief of the Han imperial forces who is also known as the "Great General". In season one, she appears in Kakouton's memory as the host of the banquet in which the incident between Sousou and Batou occurred. She appears in person in episode 12 in a war meeting with several commanders, discussing about putting down recent uprisings in the country.
She returns in the third season where she is poisoned to be turned into a cat so that Toutaku could be used as a puppet. 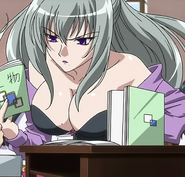 Kashin as a biology teacher in the OVA